Winston Wenyan Ma took part in an expert panel discussion in June 2020 as part of The Azure Forum for Contemporary Security Strategy 2020 series on ‘Peace, security and defence during and beyond the Covid-19 Crisis: Lessons for future global crises’, with support from University College Dublin. He writes that the global tensions around foreign takeovers have been on the rise in recent years and are exacerbated by the 2020 COVID- 19 crisis. One major driving force is the emergence of a new set of powerful investors – the sovereign investment funds, which have become pivotal players in global financial markets thanks to their enormous capital base.

During the 2007-2008 global financial crisis, sovereign funds hit the headlines for the first time, as the funds from China, the Gulf and Singapore became known as “white knights” rescuing Western banks on the verge of bankruptcy. I myself left Wall Street to join the newly established China Investment Corporation (CIC), China’s sovereign wealth fund. Having moved back to New York a decade later where I lecture on sovereign funds, it has been hard to avoid the coverage their daily activities attract.

Most recently, sovereign funds are especially in the spotlight as a recognised investor class in the tech boom – a key theme within my new book ‘The Hunt for Unicorns: How Sovereign Funds Are Reshaping Investment in the Digital Economy’. Regulatory regimes of host countries are being recalibrated to take account and to identify the new players and their more active roles in their jurisdiction. The modus operandi being employed has been the ever-expanding scope of national security reviews.

Traditionally, “national security” was generally seen as synonymous with military security and national defence. But in recent years, countries have started taking a broader view of what industries count as strategic, and the United States is a bellwether in this expansion. With an eye to further constraining foreign incursions in the sensitive tech sector, since 2018 (effective in early 2020) the Trump administration developed new Committee on Foreign Investment in the United States (CFIUS) rules to scrutinise Chinese and other foreign investments more carefully, especially in high-tech fields. The new rule emphasises national security review of transactions involving critical technology, critical infrastructure, and sensitive personal data. Many countries such as Australia, France, and Japan have similarly tightened foreign investment regulations.

Tightening of foreign investment regulations: Accelerated by the Covid-19 crisis

This trend – the tightening of foreign investment regulations – has been accelerated by the COVID-19 crisis. On one hand, the sovereign funds, with their massive portfolios of financial assets, are active (again) at the front line of capital markets. For example, by early April 2020, Saudi Arabia’s Public Investment Fund (PIF) had spent well over $7 billion to pick up stakes in the battered oil majors of Europe, ENI, Equinor, and Royal Dutch Shell as well as others. Whereas – contrary to conventional wisdom – Chinese private companies are not active in overseas investments these days. This is probably due to the combination of tightened domestic liquidity conditions, heavy debt on balance sheets, and China’s controls on outbound capital flows.

On the other hand, the pandemic depressed equity values around the globe, triggering fears across the continents of a distressed asset buying spree by foreign investors. The medical sector is probably the most “strategic” among all sectors. The vaccine research at pharmaceutical firms are clearly critical assets. Technology, biotechnology and genomics companies are handling sensitive patient data. And a much wider range of supply chains – for active pharmaceutical ingredients, basic medicines, and personal protective equipment – are suddenly becoming defined as “critical infrastructure”.

In Europe, concerns over the vulnerability of European companies has grown since Saudi Arabia’s fund amassed stakes in four European oil majors. The European Union as well as EU Member states such as Germany, France, Italy, and Spain have tightened foreign investment rules of late. The United Kingdom, where a new foreign investment law was already advancing through Parliament, has considered taking emergency action against some foreign investments.

Sovereign funds may be part of the solution

While the sovereign funds are a reason for concern, they may also provide a solution. Margrethe Vestager, who wears two hats as Europe’s top digital policy official as well as its competition regulator, said that European countries should consider taking equity stakes in companies to keep them out of the hands of state-backed Chinese buyers. The internal market commissioner Thierry Breton also championed a similar idea to protect systemically important businesses in Europe and deter any unwanted takeover or stakebuilding from outside actors.

According to May 2020 media reports, EU officials are seeking to finalise a plan for public stakes to be taken in key European companies to shield them from the economic fallout of the COVID-19 pandemic. Germany has already moved forward. It has tightened scrutiny on medical and pharmaceutical companies, especially after President Donald Trump was accused of trying to lure CureVac, a biotech firm working on a coronavirus vaccine, to relocate to the U.S. Meanwhile, KfW, the government-owned development bank of Germany acquired a 23 per cent stake in Cure-Vac to preempt any foreign takeover.

In summary, the pandemic is putting our systems and markets to the test globally, accelerating the deployment of investment screening tools to guard against foreign takeovers and increasing the direct role of the state in many economies simultaneously. It would therefore be constructive for policymakers to take a balanced view on sovereign funds between addressing valid security concerns and maintaining openness to foreign capital – both inbound and outbound. 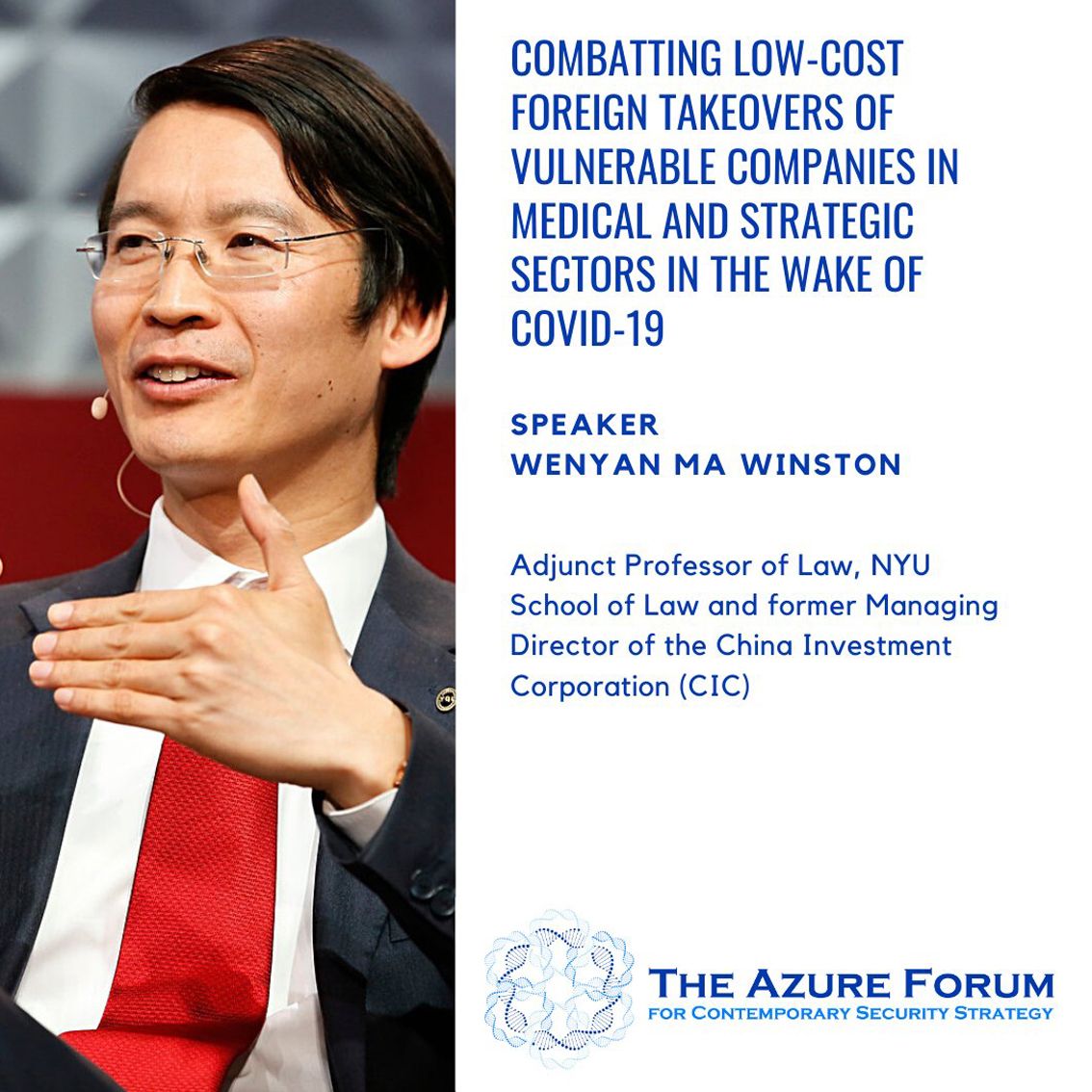 Winston Ma, CFA & Esq. is an Adjunct Professor at NYU School of Law and former Managing Director of the China Investment Corporation (CIC). He is author of Investing in China (2006), China’s Mobile Economy (2016) and The Hunt for Unicorns: How Sovereign Funds Are Reshaping Investment in the Digital Economy (Wiley, October 2020).

ABOUT THE AZURE FORUM STRATEGIC INSIGHTS