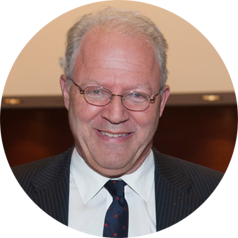 Born in Dublin in 1952, David Donoghue had a long and varied career in Ireland’s diplomatic service. He was involved for many years in the Northern Ireland peace process. He was one of the Irish Government’s negotiating team for the Good Friday Agreement (1998), which has provided a political framework for lasting peace and stability in Northern Ireland. He served from 1995-99 as the Irish Joint Secretary at the Anglo-Irish Secretary in Belfast. At different times he held the posts of Irish Ambassador to Russia (1999-2001), to Austria (2004-6) and to Germany (2006-9). At the Dublin headquarters of the Department of Foreign Affairs, he was from 2001-4 the Director General of Irish Aid, Ireland’s development cooperation programme, and oversaw in this role a significant expansion in the programme’s budgetary resources as well as in its thematic and geographic range. He also served from 2009-13 as the Department’s Political Director, a post which gave him responsibility for Ireland’s overall foreign policy and for many associated thematic aspects. From 2013-17 he was the Permanent Representative of Ireland to the United Nations n New York. At the request of the President of the General Assembly, he served with his Kenyan colleague as one of two co-facilitators, or co-chairs, for the UN negotiations which in 2015 led to the adoption of the ground-breaking Sustainable Development Goals and the wider 2030 Agenda for Sustainable Development. He also served as co-facilitator, with Jordan, for the UN negotiations which in 2016 agreed the New York Declaration on Large Movements of Refugees and Migrants. David Donoghue retired from the Irish diplomatic service in September 2017. Since then he has been actively involved in national and international efforts to promote implementation of the Sustainable Development Goals. He has also had a similar involvement regarding follow-up to the New York Declaration, notably as a civil society participant in the processes which in late 2018 led to the adoption of Global Compacts on migration and refugees respectively. He also remains engaged in issues around the Northern Ireland peace process and international conflict resolution and peacebuilding. He contributes to the work of several think-tanks and academic institutions on these various issues (including the Overseas Development Institute in London and the Robert Bosch Foundation in Germany). He is also the Chairman of Conciliation Resources, a peacebuilding organisation based in London.